NRC loves to acknowledge accomplishments of our members! Kudos to three champions, below.

First Star Recycling, located in Omaha, is Nebraska’s first and largest Materials Recovery Facility (MRF). In January, the company was awarded a $2-million, below-market loan from The Closed Loop Fund to upgrade its equipment.

The retrofit, to be installed in March and April, involves two optical sorters and bunkers that feed directly to an in-ground conveyor. The optical sorters will target clear HDPE and PET.

In a separate project, First Star replaced a screen for the separation of fiber and containers. This was needed before the optical sorters were installed. And in November 2016, they installed a robot for sorting clear HDPE. First Star Recycling was one of the first U.S. recycling facilities to use a robot with artificial intelligence.

“It’s really bringing us into the 21st century in terms of our capabilities.”

In January the Lincoln Journal Star reported that Lincoln Public Schools was on track to divert more than half their waste from the landfill in 2018. Their long-running recycling program, managed by LPS Sustainability Coordinator, Brittney Albin since 2014, has expanded into composting. By 2019, they plan to have composting in all schools in the district.

LPS has won awards from the U.S. Department of Education, Keep Nebraska Beautiful and the Nebraska Recycling Council for their efforts. 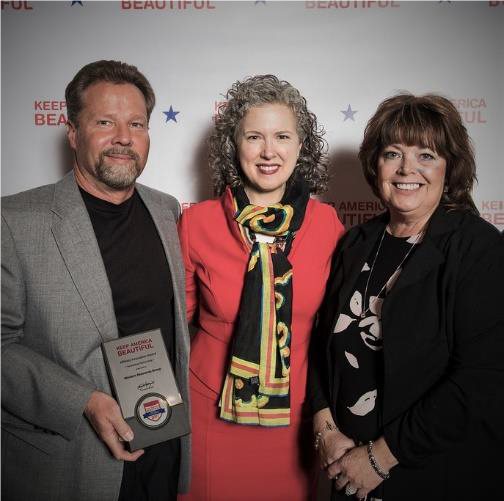 The Western Nebraska Regional Recycling Program began in July of 2016, through a grant from the Nebraska Department of Environmental Quality. WRG, located in Ogallala, serves as the Materials Recovery Facility (MRF) and “Hub” in this “hub and spoke” system, involving Keep Kimball Beautiful, Keep Sidney Beautiful, Keep Alliance Beautiful and eight other nearby towns and villages, with plans for expansion. WRG compensates the “spokes” based on fair market value of the commodities, and is able to cover the cost of transportation through grants from the Nebraska Department of Environmental Quality.

Do you have news you would like to share with our community of recycling champions? Please send us your story and we’ll be sure to include it in a future newsletter.