We would like to share success stories with our members and followers, and this month we are featuring Goodwill Industries of Greater Nebraska, who is an NRC member and recent Recycling Equipment Grant Awardee.

Tell us about your organization. Goodwill Industries of Greater Nebraska has a long history of serving Nebraska communities by collecting and selling donations and supporting people living with disabilities to live independently and work successfully. In 1968, Central Nebraska Goodwill Industries was created, serving 11 people and employing 22 people. By 2002, Goodwill’s reach in both services and retail stores expanded to western Nebraska prompting an official name change to Goodwill Industries of Greater Nebraska. By 2010, Goodwill was operating eight stores throughout Nebraska. By 2020, Goodwill opened its ninth store in McCook and in January 2022, a tenth store was opened in Alliance. Annually, Goodwill provides services to over 2,000 people living with disabilities and barriers across central and western Nebraska. Services promote independence and access to the community, help people become successfully employed, support goals of wellness and recovery, teach responsible behavior and provide safe and affordable housing. Goodwill collects approximately ten million pounds of donations at its stores and through community donation drives. This has diverted millions of pounds of donations from landfills, redirecting the product to recycling markets contributing to a healthier planet.

What are your sustainability goals and initiatives?  Goodwill’s sustainability goals and initiatives are to divert as much product as possible from local landfills and to reduce transportation costs between its warehouse and stores. Goodwill constantly seeks ways to create more efficient ways of doing business. For example, by adding a baler to the Alliance process, Goodwill can now transport one bale to the warehouse in Grand Island instead of three containers containing the same amount of product. This has reduced the footprint on trailers and extended the time and frequency between trips to that location.
What are some of the challenges and barriers that you have faced? Tasked with being good stewards for their organization, Goodwill is extremely mindful of their budget. Generous grants have allowed Goodwill to further their goals in a much shorter timeline than originally planned.
What are some of your success stories?  The Alliance team is thrilled with the new baler. The store manager shared that, “everyone really likes the baler. All the staff members are excited about learning or have already learned how to use it. It really is a time saver, eliminating the need to set up totes for product and more product can be loaded in the trailer because the product is baled. We very much appreciate the support.”
What are some lessons learned that you think others could benefit from? One of Goodwill’s major lessons is to never stop looking for ways to improve. Even taking a second look at a seemingly small process can have major impacts overall. For example, we looked at our process and all of the ways it affected everyone from the time it was donated to the time it was received at the warehouse. Adding a baler has allowed them to better design their workflow and storage to streamline and enhance safety in the production area. It has allowed them to work more efficiently, saving time and transportation costs across our organization. 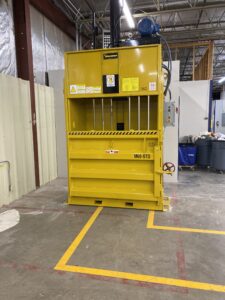 You recently received a NET Small Equipment Grant through the Nebraska Recycling Council. How has that helped you achieve your goals?  The addition of the baler in Alliance has allowed them to compress loose mixed rag textiles (clothing) into compact bales. Baling allows more to be transported on one truck resulting in fewer hauls going down the road. In the short amount of time Goodwill has had the baler at this location they have been able to extend the amount of time between trips by one additional week, reducing their environmental impact.
How has your membership with the NRC played a role in your sustainability goals/initiatives?  NRC provides the membership with great information including best practices, fact sheets and success stories. We appreciate NRC’s guidance and financial support to communities, organizations and businesses across Nebraska.